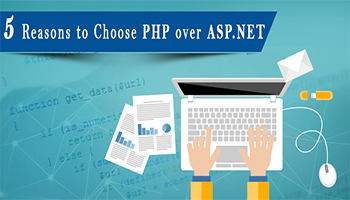 Today, when it comes to building websites, PHP and ASP.NET are probably the two most popular options to choose from. But which one is better in terms of cost, usability, SEO rankings, and moreover about its maintenance and user-friendliness. I will help you to uncover all the major differences between these 2 development technologies that will make convenient for you to choose best out of them.

Let’s start with some basics about them and as popularly known, both the languages are used to create dynamic web pages that can exchange their content with the databases freely. ASP.NET stands for Active Server Pages and is a Microsoft product. This is mainly used in conjunction with IIS server (Internet Information Server) while PHP is meant to Hypertext Pre Processor which was a project initially created by Rasmus Lerdorf but later on modified by several other programming experts. It runs over UNIX and Linux servers.

Now we come to the major and noticeable differences between ASP.NET and PHP based on which you can easily decide, which one works better for you. Cost and budget are the foremost and among most important factors considered at start of any project. To develop ASP.NET applications, you must have IIS server installed on a Windows server which is not free of cost, making it a costlier option at initial stage; while PHP runs on Linux which is an open source server, available free of cost to everyone. Moving on to database connectivity, ASP.NET uses MS-SQL that is again an expensive option as compared to PHP; which uses MySQL available at no charge across large number of sources on internet.

Coming to the performance of PHP and ASP.NET codes, PHP again wins the race. PHP code runs in its own memory space that allows your system to perform better while, ASP.NET uses the COM architecture feature which is a kind of overhead for the server and users as well as it reduces the overall performance. You can run PHP code on a variety of platforms like Windows, Unix, Linux and even Solaris systems while ASP.NET code can primarily run on Windows platform and to use this on others, the apache or IIS server should be installed which are again paid options.

In IT industry, scalability is gold. Whether you are dealing with code, hosting or even database, scalability is always considered significantly. Just the way PHP is built, you can easily increase its cluster size by simply adding more servers to it as your projects grow.

PHP supports C++ language syntax which is most widely known to programmers and considered as the best programming language ever. Therefore, those who like the feel of C++ probably find themselves more convenient with PHP while, ASP.NET is having Visual Basic feel is closely related to other Microsoft languages.

Based upon these factors, you can easily identify why PHP is preferred over ASP.NET nowadays and which of the following will be suitable for your purposes. If still in confusion, we are a message away to help.

Dikonia being a professional web development company India have the masters of PHP who can build customized solutions for its clients. Let’s have a talk if you have any project in mind and looking for the experts to implement your idea.