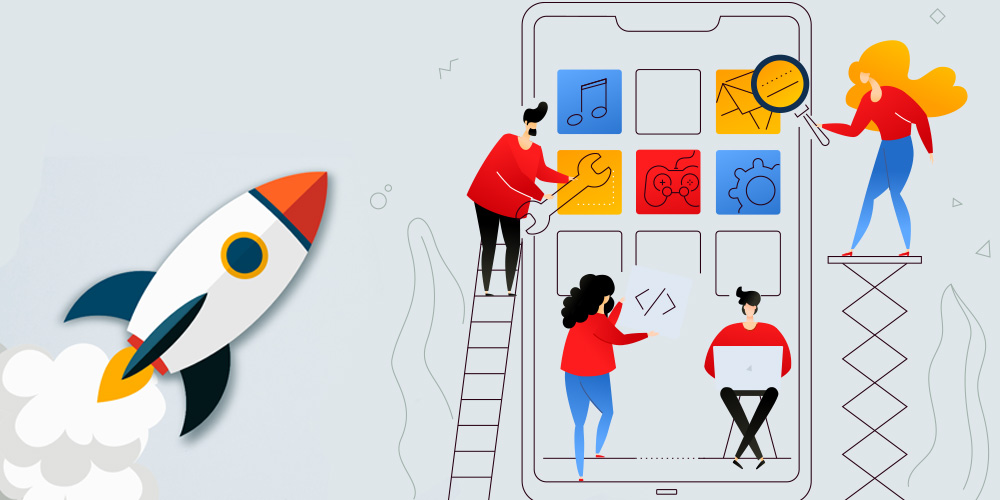 How to launch your mobile app startup without spending $100k?

The number of mobile apps is increasing day by day due to the convenience they provide on user’s smartphones. Most apps are free to download and find investors easily during funding rounds.

The companies behind these mobile apps are also coming up rapidly. There are thousands of registered startups in India and nearly 50% of them have a mobile app of their own.

As the trend continues to rise, newer companies would also want to delve into the world of mobile apps, but the associated costs and planning can be a detrimental factor.

Our Top IT Company in Chandigarh has developed Mobile Apps for several startups and we have some fruitful tactics for startups that wish to launch their startup without spending a large amount of capital.

The answer basically lies in Hybrid Mobile App development that let’s companies get proper mobile apps for a much smaller fraction of the price of Native Mobile Apps. Let’s learn about the difference and cost saving measures.

The developer basically uses a framework that utilizes simple coding technologies like Javascript and HTML that are a lot easier to implement than Object Oriented Programming languages such as C++ or JAVA.

Hybrid Mobile Apps are platform independent and can be made to run on either Android or iOS platforms depending upon your startup’s target market.

This means these apps are not coded with reference to the OS’s native libraries and features. The intended features are integrated with the app using APIs. These APIs are readily available for developers for all kinds of features.

The large support for API-based feature integrations further reduces the developer’s workload. APIs can assist in integrating all kinds of features that would take months to code by hand. The prime example of this could be a Payment Gateway, User Authentication, Image Processing, Chat Support and what not.

The Ionic Framework, which is one of the hybrid mobile app development frameworks, offers more than 100 API integrations with popular services such as Google Maps, AWS, Crashlytics and more. This ensures that your app would not compromise in the kind of tasks it can perform.

The biggest advantage of Hybrid mobile apps according to our Top IT Company in Chandigarh is that these apps share a single codebase for both Android and iOS OS platforms.

This means you can publish apps on both the platforms using the same project. The developers don’t have to code the app separately for each platform which saves a hell lot of time for the developers. This factor is lucrative for startups that envisage a faster development time and lower budgets for their mobile apps.

We have completed several projects using React Native that comes with the automatic compiling of code into the language native to the platform. This means, that you’d code in Javascript but the code will compile in Objective C or JAVA depending where you wish to publish your app.

The only mentionable limitation of hybrid mobile apps is that they’re not well geared to support device’s native sensors and hardware features. So, if you have a mobile app idea that uses a lot of device features, you may want to look into native app development.

Nonetheless, this is rarely the case with the upcoming breed of startups. Most startups bank on ideas that implement clever manipulation of databases and information retrieval. All of which doesn’t require programming in native code. Therefore, Hybrid mobile apps suit startups really well who wish to launch their first public beta as soon as possible.

If you wish to launch your mobile app startup quickly with a limited funding and we believe that the cost of mobile app development is somewhere between 20 to 35% of your total budget, then you won’t need a sum as large as $100k to get a fully functional mobile app. You can get in touch with our IT Company in Chandigarh for hybrid mobile app services.

You can do it in mere $10-15k and keep scaling as your user base grows. The same strategy is being followed by most startups in India who have tight budgets but don’t shy away from testing their ideas with the masses.